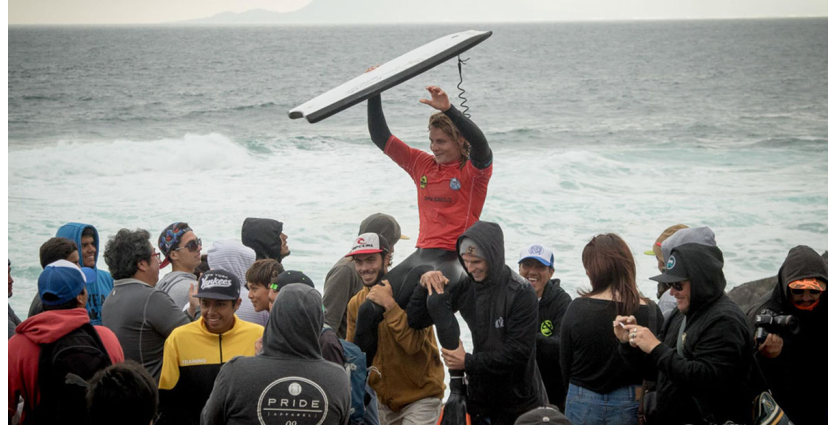 We can’t stop Pride Team riders in Chile. After Jared Houston’s remarkable win in Arica, it is now Lewy Finnegan who distinguished himself during the Antofagasta Bodyboard Festival, a stage of the APB Tour. His victory is particularly delightful given that it is his first one on the tour.

Here is his reaction after this win :

"Winning my quarter final against Amaury Lavernhe  was when i realised that winning the Antofagasta Bodyboard Festival was actually within reach.

The previous 3 out of 4 world tour competitions i have entered i have ended with an equal 5th place finish (getting knocked in the quarters) and had been really happy every time to get that far, but this competition i really wanted to get one heat further.

I had surfed 3 or 4 heats already in the competition when i came up against Amaury in a man-on-man quarter final and was really hungry this time to keep going, instead of being content with an equal 5th and subconsciously slacking off in the quarter. I was feeling a mix of emotions. Excited, nervous, confident, doubtful, calm, amped, all coming in waves of emotions, mainly because of how insanely well Amaury has been surfing on the World Tour this year. I knew that it was going to be an exciting heat and as soon as it started we both caught a wave in the first set and i managed to land a big flip and score a 9.25. If it wasn't for that first wave to boost my confidence and put myself in a good position in the heat i don't think i would have won. After getting another wave and scoring a 7, i was in a pretty good situation with Amaury needing an 8.6 to beat me. I had priority with a couple of minutes remaining and let a little wave go past me thinking it didn't have the potential to give Amaury the score. Next thing i know Amaury is on his way to the moon, throwing down a huge backflip with cheers from the crowd reaching all the way out to where i was. I held my breath until the commentator announced that he scored an 8.5, narrowly missing his score needed by 0.1. The hooter then sounded for the end of the heat and that was all she wrote for our quarter final, which is when the surrealism began. I was so stoked to have cracked through the quarters but i knew that if i was able to defeat Amaury then there was no reason for not being able to take the whole thing out.

That nail-biting heat was definitely the pivotal moment in my day and it made me more confident with myself and my ability for the semi and the final. "If i can take down Moz, then i can win this thing", i was saying to myself before the start of my following heats. With luck on my side and managing to be on the better waves and land all of the big airs i attempted, i ended up taking the final out in complete disbelief of what i had achieved.

I'm still absolutely shocked that i won yesterday and don't think it is going to sink in until i get home in a few days to my family and friends. Thanks again to everyone who supported me during the competition. x"

We wish him the best for the next competitions, hoping that he will reiterate this kind of performance.

Here is the ranking of PRIDE Team after Antofagasta :